Analysts warn the twin disasters of Knysna fires and the storm that hit Cape Town will put pressure on the insurance business. 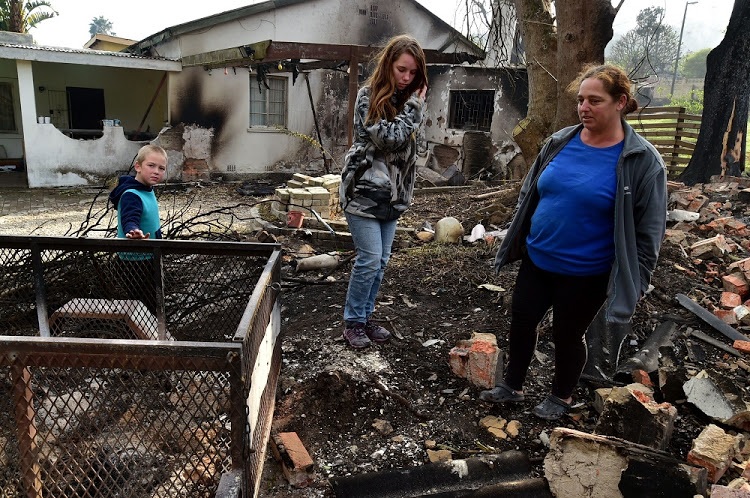 Photo caption: Picking up the pieces: Rain brought some relief to Garden Route where fires gutted parts of Knysna and Plettenberg Bay. In the picture, Michelle Kruger, with her daughter Bianca, 15 and son David, 7, inspect their destroyed property in Gardner Kloof, Knysna. Picture: THE HERALD

South Africa’s insurers are bracing for an influx of claims, expected to increase after the outbreak of fires in Knysna damaged property worth millions of Rands and resulted in the evacuation of about 10,000 people from their homes.

Analysts on Thursday said the twin disasters of fires in the coastal town of Knysna and the storm that hit Cape Town this week would put pressure on the insurance business, although a cushion would be provided by reinsurance cover taken out by insurers. Reinsurance cover is insurance for insurers and is the practice of insurers transferring portions of risk portfolios to other parties.

“The fires and storm will be claimed as an event and would be covered under the reinsurance cover which insurers are part of. Insurance companies like Santam have reinsurance cover in place, and that limits insurers like Santam’s losses to a cap amount. This varies around R50m and R100m per catastrophic event like the recent floods or fires,” said Adrian Cloete, portfolio manager at PSG Wealth.

The insurers are already being battered by an economy that slipped into a recession in the first quarter, the country’s credit-rating downgrade to junk status, continued political turmoil and unemployment at a fourteen-year high.

Another analyst who asked not to be named said that insurers must “expect large claims,” although the extent would only be quantified once the full-scale of property damages was known.

Like the rest of the sectors in the country, the insurance industry has not been spared the economic headwinds from a recession, a dip in foreign investor confidence and political uncertainty from leadership wrangles in the ruling party.

“The biggest share price driver for these companies is the growth in net asset value over time, and this metric will only very marginally be impacted by these events,” he said.

The Western Cape Disaster Management Centre said the Knysna fires were one of the most destructive blazes in recent memory. More than twenty-six fires broke out late on Wednesday, with “severe devastation” in at least twelve suburbs.

Eight people have been killed, three of them in the Knysna area, as the worst storm to hit Cape Town in three decades hit the town on Tuesday before hurtling eastwards along the Garden Route.

“Humanitarian support is being coordinated for an estimated 8,000 to 10,000 residents of the greater Knysna area, after devastating fires,” said James-Brent Styan, spokesman for the Western Cape local government ministry.

The wildfires, driven by winds in excess of 50km/h, destroyed property in twenty suburbs as buses were sent to evacuate trapped residents in the tourist town.

According to the South African Weather Service, 37mm of rain fell at Cape Town airport. Other areas recorded as much as 131mm.

Meanwhile, corporate organisations are assisting Knysna residents with donations running into millions of Rands as well as foodstuff.

Checkers, Woolworths, DHL, and Massmart are among the large pool of corporates that have assisted. Outsurance said it had donated R250,000 to the Gift of the Givers to assist in relief efforts.